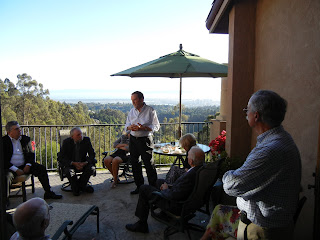 This won't be Dean Boat's first time meeting with College of Medicine alumni in California. This past June, Dean Boat met with UC alumni during three separate events in Pasadena and San Francisco. He shared his vision for the college and significant achievements of the college over the past few years. 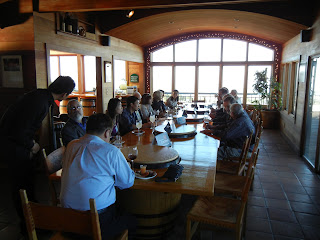 The events were hosted by three alums - Dr. Dan Asimus '72,  Dr. Alan Solinger '74, and Dr. Thomas Fogarty '60. Alumni enjoyed gathering at Dr. Asimus's beautiful home in Pasadena. While other alumni gathered at the Solinger’s beautiful home overlooking Oakland, the Bay and down town San Francisco, and at the Thomas Fogarty Winery which was founded over 30 years ago in the Santa Cruz mountains.

Stay tuned for more alumni events in the California area! 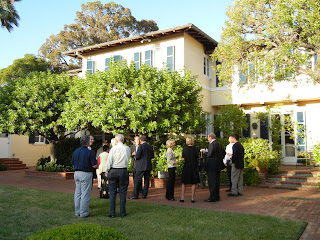 Posted by Proudly Cincinnati at 9:29 AM No comments: Links to this post


You never know what unforeseen causes and circumstances will greatly influence your life’s path, and then affect the lives of others.

Take Jon Bloom, for example. At the time he was exploring his options upon finishing work for his second UC degree in 1983, the university’s Career Development Center was serving as a quasi-feeder for Florida’s Miami Herald newspaper, of all places. Accepting their job offer and heading south, Bloom began a varied business career as well as nearly 30 years as a leader within the UC Alumni Association’s nationwide alumni chapter (now networks) program.

“Once I got down there, I found that the newspaper’s advertising department was filled with UC alumni because of the UC Career Development connection,” Jon recalled. “There were probably a dozen of us there. I hadn’t known them at UC — most were a few years ahead of me.”

One of them was Tim Barngrover, who had been coordinating some UC alumni events in the area. Bloom attended a few that first year before Barngrover relocated, at which time Bloom essentially succeeded him as the de facto chapter leader for the area from Miami north through Palm Beach, Ft. Lauderdale and the Treasure Coast — about 2,000 UC alums in all.

“I found that we had a lot of people in the area, but events were sporadic so they weren’t very well attended. I was able to get more consistency on the calendar — alums could count on a certain event every spring and fall, and within a few years we were drawing up to 100 people per event.”

In 1994, Bloom and his wife moved to Columbus, Ohio, which had triple the number of UC alumni. Not surprisingly, Jon sought out alumni volunteer opportunities there as well, and in the years that followed, he represented the UC Alumni Association at such events as game-watches, receptions, and admissions fairs for prospective students.

Student Experiences Shape Alumni Attitudes
As he transitions away from a network leadership role this year, Bloom reflects on UC’s past and the good times awaiting future alumni, thanks largely to an evolving culture shift he’s seen in recent years.

“One of our biggest challenges is that many students, at least in my day, didn’t go to UC as their destination of choice — they went there because they had to because of finances or proximity, not because they wanted to,” he said. “So they may have harbored some resentment toward UC from the start. Many were commuters on campus for only a few hours a day (too much of it spent hunting down parking spots) before heading home or to their jobs, and their attitudes toward the institution weren’t particularly positive. Now these people are 40, 50, 60 years old, and they may not be very excited and enthusiastic as alumni.”

Still, seeking out UC connections as alumni is usually a rewarding endeavor, and Bloom also sees that dynamic diminishing now as UC has become much more of a destination school for today’s students.

“And that is very important,” Jon said. “Now they’re much more likely to be engaged while they’re students, and therefore later in life as alumni. When college becomes a place you want to reach back and connect with, a lot more is possible. At that point, UC isn’t just a ‘past tense’ thing.”

Facilitating those connections is what has brought Jon Bloom the most satisfaction over the years.

“A couple of older gentlemen in their 70s or 80s saw each other at a UC Alumni Association picnic in Hollywood, Fla., almost 20 years ago,” he remembered. “These two guys had been great friends and neighbors in elementary school, but one of the families moved away and the boys lost touch. They each went to UC but never knew the other was there. Then after having no contact since they were about 10 or 12 years old, they ran into each other at our alumni event. We got to see them react to seeing each other and re-establish their friendship, all because they each attended UC and then attended the same UCAA event a lifetime later.

“That’s a big part of why we do this.”
Posted by Proudly Cincinnati at 11:09 AM No comments: Links to this post