Stay Connected to UC from Your Smart Phone 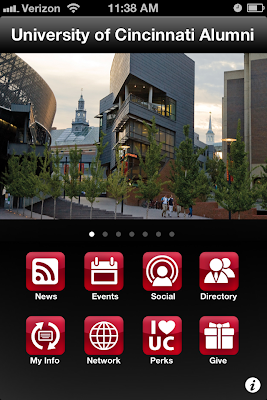 The world of technology is advancing, and UC is following suit with the development of a UC Alumni mobile application that keeps you connected, no matter where you are geographically. The app, which is available for free download from iTunes and Google Play, boasts a number of features to keep UC right at your fingertips – literally.

The UC Alumni mobile app launched in late February in conjunction with the UC mobile app and a new on-campus mobile apps incubator. The mobile app incubator provides a space for students, faculty and staff, and alumni to collaborate and build mobile apps together.

Phase one of the UC Alumni mobile app includes the following features:
More to come…

At UC, we’re always striving to improve. And that’s why we are already taking steps to make the UC Alumni app even more beneficial for you. Our plans include adding engagement features like a geo-location section that allows you to find and connect with other UC alums, better integration with social networking sites like LinkedIn, a jobs directory, and more.

If you are interested in providing feedback about the application, please email us at proudlycincinnati@uc.edu. To learn more, visit the mobile app section of the alumni website.

Posted by Proudly Cincinnati at 4:02 PM No comments: Links to this post

When Justin Post met his wife, Kim, their Bearcat pride instantly bonded them together. Kim was a student at DAAP, and Justin was a recent grad from UC with a degree in political science. After dating for a few years, Justin surprised Kim with an engagement the night before her graduation.

“On the last night of DAAPworks in the spring of 2011, Kim was guiding me – along with all of her family – through the various senior projects and showcases in the DAAP building. Little did she know, at the time, that I had an engagement ring in my pocket, and I was set to drop to one knee once we were finished,” Justin explained. “After what seemed like forever, the tour concluded, and Kim and I journeyed downtown where I popped the question on Fountain Square. Celebrating our engagement and her graduation all at once the next day is something we’ll always treasure. The look on her family and friends’ faces as she showed off her ring at Fifth-Third Arena will always be etched in my mind.”

Justin and Kim shared their love for UC with their wedding guests by hosting a UC-themed wedding. In addition to red and black wedding colors, Kim surprised Justin by hiring the Bearcat mascot to attend their wedding!

The couple continues to show their love for the Bearcats by visiting campus on a monthly (sometimes weekly) basis. These devoted Bearcats are both football and basketball season ticket holders. Justin and Kim even travel to various football and basketball games to root for the Bearcats in other cities. “There are few better feelings than joining in with dozens of other Bearcat fans as you cheer “Down the Drive” in a city outside of Cincinnati,” Justin said.

Justin and Kim reside in Cincinnati and Justin works for Map Your Show, a software company on the eastside of Cincinnati, and Kim is a designer for Powerhouse Factories in Newport, Kentucky.

Posted by Proudly Cincinnati at 12:59 PM No comments: Links to this post

If you graduated from the University of Cincinnati, you know Bearcats stick together through thick and thin. The bonds that friends build while attending UC are as strong as family ties. When a member of the Bearcat family becomes ill, alumni pull together to support their family member.

Leslie Andrew (Knoch) (A&S ’05 and CECH ’08), a two-year team captain of the women’s basketball team, was diagnosed with melanoma during the summer of 2011. Since Leslie’s diagnosis, her friends and family, a close knit group of UC alumni, have been at her side throughout her battle with cancer.

“Leslie is one of my greatest gifts from UC. The university could not have recruited a more talented, intelligent, dedicated, loyal and inspirational basketball player,” said friend and UC Alum Anna Barrett. “We are indeed a Bearcat family.”

Following Leslie’s diagnosis, she underwent extensive surgery and went into remission thereafter. Unfortunately, after a year in remission, Leslie’s cancer returned. Since then, Leslie has undergone radiation treatments and immunotherapy. She is currently hoping to be part of a cancer treatment trial in Maryland.

“If you ever had the chance to watch Leslie on the basketball court, you know she is a fighter,” explained Allison Hoehn, UC alum and friend of Leslie.

With the support of Leslie’s husband Jon, 2-year-old son Landon, family and friends, Leslie has not battled cancer alone. Leslie’s supporters are planning a fundraiser event for Leslie and her family on February 16, 2013. The fundraiser titled, “Team up for Leslie” will assist Leslie with her medical treatment costs.

“We are excited and grateful that the women’s basketball team will honor Leslie and her family  during pre-game on Feb. 23rd," said Hoehn. “We hope everyone will come out and support the fight against cancer while supporting one of UC’s own."

Show your support for Leslie by commenting below!