Why Are You Cincinnati Smart?

UC launched a new campaign called Cincinnati Smart this past month. This campaign provides students, faculty, staff, alumni and friends with the opportunity to tell the world why they are Cincinnati Smart. UC is a unique university that creates the best environment for learning with the best minds and in the best academic programs.


Cincinnati Smart is not only a campaign, it is who you become while attending UC, and it gives you a competitive edge in the world. Many factors set UC apart from other universities. UC has a revitalized campus and provides experiential learning. It is in the top 25 of public research universities and has standout division 1 athletics. Last but not least, UC President Santa Ono has even coined UC the #HottestCollegeInAmerica. The marketing plan includes 85 high schools that will be part of the campaign through television, radio, billboards and various ads. Prospective students will have the opportunity to see why so many people are proud to call UC a second home.

Students, professors, alumni, friends and family have already started sharing their stories of why they are Cincinnati Smart. Everyone can help spread the word about why they believe UC is the best university around.


Help us spread the world and share your story about why you are Cincinnati Smart.

Posted by Proudly Cincinnati at 8:50 AM No comments: Links to this post

“I just knew UC was the one,” said Alex Hartke the first time she stepped foot onto UC’s campus.

Alex, a 2012 College of Nursing graduate, took advantage of her time at UC. She was involved in almost everything possible while at UC. Alex was a ROAR campus tour guide all 4 years as an undergraduate, College of Nursing student tutor, involved in the social sorority Pi Beta Phi, and served on the Committee for Athletic Traditions and Spirit. She did it all.

During her time at UC, Alex received a Cincinnatus scholarship and College of Nursing Scholarships, which helped her stay focused on her academics and push herself harder to reach higher. She wanted to get as much out of UC as possible.
“My education is the key to my career,” said Alex. “It’s given me so many great learning opportunities during my undergraduate time which led to my first job after graduation at University of Cincinnati Medical Center.”

Coming from a small town, Alex thought of Cincinnati as a culture shock at first. However, she learned to grow and love the city of Cincinnati. She connected with prospective students as a tour guide because of her own transformation while she attended UC.

“I strive to ‘Represent the C’ as best as I can as an alum, and I look forward to seeing my alma mater grow in the future,” said Alex. “My pride definitely shows through during football season. Some of my best college memories come from traveling to Memphis, Knoxville and Oxford to watch my Bearcats,  and then coming home to Nippert Stadium to watch them play at one of my favorite spots on campus.”

Recently, Alex relocated to Dallas, Tx. to start a new career at Baylor University Medical Center at Dallas as a nurse on their neuroscience unit. She credits her career success to her co-op opportunity as an undergraduate student at the University of Cincinnati Medical Center, where she worked on the orthopedic and trauma unit.

“I’m Proudly Cincinnati because I love UC,” Alex says. “I’m so proud that I had the opportunity to spend my undergrad time in Cincinnati.”

Posted by Proudly Cincinnati at 8:49 AM No comments: Links to this post 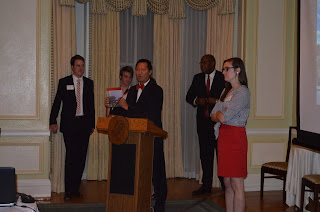 UC President Santa Ono kicked off the 2nd annual #HottestCollegeInAmerica tour in Boston on August 1st with an energetic room full of alumni, prospective students, current and co-op students, parents and friends of UC. Ono started off the night with an address on the state of the University.

The #HottestCollegeInAmerica tour has solidified and charged UC alumni networks around the country to have an even greater affinity with their alma mater. The tour is presented and coordinated by the UC Alumni Association and is named for Ono’s twitter hashtag that promotes UC as the “#HottestCollegeInAmerica” on social media.

The Boston tour stop was the first stop on the 17 city tour ending in Baltimore, Md. on June 11, 2014. Ono will travel across the country throughout the next year, hitting many major cities in order to reach as many fellow and potential Bearcats as possible. Check out photos from the event on Facebook.

Click here to check out the rest of the #HottestCollegeInAmerica tour schedule. Follow @PrezOno on his journey across the country.

Have you visited with Ono at previous tour stops? Comment below about your favorite part of President Ono’s visit to your city!

Posted by Proudly Cincinnati at 1:17 PM No comments: Links to this post

Now is the Time. This is the Place.

Nippert Stadium is ready for a series of long-anticipated renovations. Construction is scheduled to start in December of this year and is projected to finish by the start of the 2015 season.

Since the renovations are scheduled to take more than a year, it is a possibility that the Bearcats will not be able to play at Nippert Stadium for the 2014 season. One of the options being considered as an alternate location is Paul Brown Stadium. While the Bearcats have used Paul Brown Stadium in the past, a final decision has yet to be made.

The Bearcats have used Nippert Stadium as a playing field since 1901. This makes it the second-oldest playing site in the nation for college football. The demand for the renovations are in line with the increased success for the Bearcats throughout the years.

For more information about the renovations and the transformation of Nippert Stadium, click here.

Posted by Proudly Cincinnati at 9:06 AM No comments: Links to this post

As football season nears, the summer edition of the UC Where You Are newsletter featured 'Bearcat Hangouts' in Columbus, Washington, D.C., and Chicago. These hangouts provide Bearcats fans with an opportunity to gather with other alumni outside of Cincinnati and cheer on the 'Cats during various sporting events.

Other stories in the summer edition included a story about an alumnus who generated millions of views to his freelance video, a profile of an alumnus who started SparkPeople.com, details about the second leg of the #HottestCollegeinAmerica tour, and a story about a recent graduate's UC experience and new career.

If you didn't receive the newsletter via e-mail, check out the full issue online and then update your contact information to ensure you receive the latest version in your inbox every few months.

If you have an idea for the next edition, or know an alum to spotlight, Tweet us at @UofCincyAlumni, comment below or send us an e-mail to alumni.association@uc.edu.

Posted by Proudly Cincinnati at 11:53 AM No comments: Links to this post